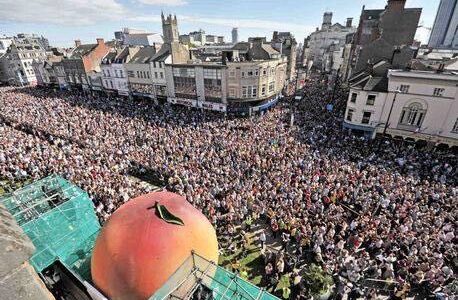 Chloe has had the pleasure of working on several large-scale events. Most notably she was co-choreographer and performance team leader for Ar Waith, Ar Daith, the Wales Millennium Centre’s 10th anniversary spectacular by Walk the Plank and was Assistant Mass Movement Director for National Theatre Wales’ epic City of the Unexpected, celebrating Roald Dahl’s centenary which saw over 3o0,000 audience roaming the streets of Cardiff. Projects have involved choreographing mass hoola-hoopers, ballet choruses and pillow fights, synchronised swimmers, umbrella dancers, processions and parades, aerial dancers and a swan-lake duet for a pair of excavators.

She has directed the opening spectacle for Splore 2018 & 2019, a music festival held in Tapapakanga Regional Park, New Zealand.

Chloe is passionate about engaging community and audiences to large-scale events through effective and imaginative choreography and direction.

Workshops can include contact work masterclasses, contemporary dance, physical theatre, improvisation, performance and character techniques and choreography amongst other styles. Chloe is also able to offer mentoring and rehearsal direction.

Get in touch if you’d like the company to create a bespoke workshop or project for you.