Following the inevitable pause in 2020, we’re thrilled to have finished creation and be touring The Air Between Us. This new outdoor aerial duet in collaboration with award-winning artist Rodney Bell has gained Creative New Zealand funding and is touring NZ through 2021 and beyond including Auckland Arts Festival (5-7th March), CubaDupa (28th & 29th March), Festival of Colour Wanaka (16th & 17th April) and Light Nelson (9-13th July) with more dates in the pipeline. (Image below by Oliver Crawford at CubaDupa) 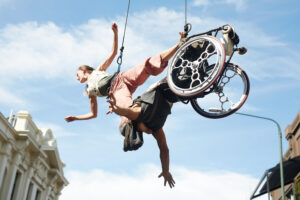 Chloe will also be back helping the magic happen at Splore Festival’s Living Lounge, presenting ‘Us’ – a mass movement event at Wanaka Festival of Colour (15th April) and taking The Arboreal Aerialist to the Dunedin Arts Festival (19-20th April).

Conscious Dance Aotearoa is in its third year and the magic will take place once more at Riverside Community (near Nelson) 2-6th December 2021 where up to 100 people will gather for four days and nights of the best Conscious Dance offered from facilitators across the country. Tickets are now on sale!

Chloe hosted a co-created Contact Improvisation community gathering, Conscious Contact Weekend, 12th – 14th March at The Baton, Motueka Valley. This was a delightful sold out retreat where 15 wonderful souls shared dances, wild swimming, kai and accommodation in the historic ‘Baton Hotel’, with the backdrop of the stunning Kahurangi Ranges. Keep an eye out for future offerings like this and come and join the magic and learn new skills about consciously relating, on and off the dance floor. 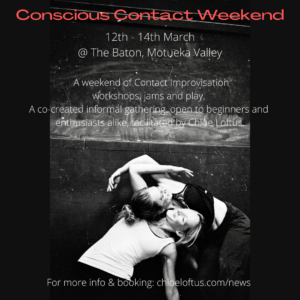 Chloe will also be back helping the magic happen at Splore Festival’s Living Lounge, presenting ‘Us’ – a mass movement event at Wanaka Festival of Colour (15th April) and taking The Arboreal Aerialist to the Dunedin Arts Festival (19-20th April).

Firefly is a new counterweighted-aerial-fibre-optic-illuminated-watery-delight helped wow the audiences and bring in the new year with a spectacle at the Taranaki Festival of Lights in Pukekura Park, New Plymouth. The work is now available to tour to winter and light festivals!

The year kicked off with facilitating Conscious Contact workshops across Nelson and Kapiti Coast, exploring Contact Improvisation through the lens of our need for connection through mindfulness and presence and curiosity. Chloe has been invited to teach at Australia’s Convergence Contact Improvisation festival (June 2020). Unfortunately this has been put on pause due to Covid-19.

THE AIR BETWEEN US is a new outdoor inclusive aerial duet, created by Chloe Loftus and Rodney Bell. The work was due to premiere at CubaDupa and Light Nelson 2020 before an ongoing tour of NZ. Unfortunately this and the ongoing touring of The Arboreal Aerialist across Aotearoa has been put on pause due to Covid-19.

CONSCIOUS DANCE AOTEAROA (3-6th April), the national gathering of conscious dancers co-directed by Chloe Loftus has been postponed until further notice due to Covid-19. Please keep an eye out for further updates for a new date as and when it is safe to gather once more.

There has been exciting mass movement project developments with Wellington and Nelson for 2020, however all projects are currently on pause due to Covid-19. Stay safe everyone. Kia kaha.

Kia ora, iechyd da and happy new year! 2019 is scrubbing up nicely. Here’s a line up of the company’s upcoming creative & touring ventures…

Following a research & development week, it’s looking hopeful that 2019 is the year that HERELESSNESS will be brought to life! Chloe is working with several Arts Festivals to develop this new outdoor work that sees bungee-assisted dance mix with the vibrational phenomenon of ‘cymatics’, collaborating with landscape designer James Wheatley.

TOUCH COMPASS new commission premiere at SPLORE (23rd & 24th Feb): Alongside her tree antics, this lush beachside music festival will see Chloe once again directing the opening ‘spectacle’, plus her new choreographic commission with Touch Compass Dance Company, Te Ranga Ika / The Shoal will premiere here. Featuring the Out of the Blue fishies and aerial feats, this new full-length work will premiere at Splore and will be re-worked for InMotion Matariki (Auckland, 6th July).

CONSCIOUS DANCE AOTEAROA (5th– 8th April): Chloe is beyond delighted to be collaborating with Hester Phillips on the creation of this blissful event featuring four days of epic conscious movement workshops from practitioners across Aotearoa. Tickets SOLD OUT! Watch this space for 2020 dates!

NZ CONTACT IMPROVISATION RETREAT (16th– 22nd Jan): Chloe will be teaching several CI workshops and soaking up the inspirations of others at this beautiful lakeside retreat in St Arnaud.

Chloe is super excited to announce her collaboration with Hester Phillips as joint event organisers for Conscious Dance Aotearoa, a blissful weekend of dancing open to all. Tickets available,  5-8th April 2019, Riverside Community (near Nelson, NZ).

Chloe’s new work Out of the Blue was commissioned by CubaDupa and premiered at the Wellington festival on the 24th & 25th March before being available for touring through 2018/19. So far the fish have shoaled at In Motion Martiki (Auckland NZ), Green Man Festival and Butetown Carnival (UK), Blossom Parade & White Night for Hawke’s Bay Arts Festival (NZ).

Chloe also performed at Light Nelson Festival, creating an aerial installation 10m up a heritage tree. The Arboreal Aerialist has since been featured in the Hawke’s Bay Arts Festival and is now touring through 2019.

Chloe started the year in New Zealand, exploring work opportunities and writing funding applications while amongst the familiar kiwi hills. Chloe is currently starting developments for a new outdoor work looking to tour 2018….

The end of the year saw Chloe spend 8 weeks living beach-side in Long Bay having been named Auckland Parks Artist in Residence. The time was spent creating and performing a new parks inspired bungee-assisted dance solo under a pohutukawa tree, presented on-site December 2017. You can see a reflection of the residency here.

Finally got round to editing some of the footage from the bungee-assisted dance research and development project. If you missed the sharing, take a peek here.

2016 was a busy and exciting year with new projects, residencies and commissions:

Chloe was awarded a British Council and Wales Arts International research and development grant to explore the potential of developing a production with Welsh and Indian dancers exploring contact improvisation. Chloe spent 2 weeks in Goa as part of the India Wales project.

Articulture and the Wales Outdoor Arts Commissioning Consortium have awarded Chloe Loftus Dance with a new commission which will see the company create ‘Act of Strangers‘. This short outdoor piece will be touring throughout the summer including Festival No. 6 and the Greenwich and Docklands International Festival. Full details and tour dates can be found here.

Chloe has just spent a great week at the wonderful Dance House in Cardiff, the home to National Dance Company Wales, after being awarded a residency there. She spent one week exploring bungee-assisted dance. Completely self-taught and delving into the possibilities of solo work on the apparatus, she played with the altered sense of gravity and suspensions. A short film of her project can be found here. The work was then further developed through an Arts Council of Wales and Wales Millennium Centre funded research and development project ‘Know No Bounds’ working with another dancer, a counterweighter, a designer and a dramaturge. The 2-week project proved really informative and successful, footage can be seen here and images here.

If you’re a fan of Roald Dahl (and let’s face it, who isn’t?!) it’s set to be an exciting year as there are projects taking place across the country to celebrate his centenary. City of The Unexpected is one of these events, a Cardiff city-wide performance celebrating all things Roald Dahl on 17th & 18th September 2016. Chloe will be working alongside Jeanefer Jean-Charles as Mass Movement Assistant Director – choreographing hula hoopers, lindy-hoppers and excavators to name but a few!

Chloe Loftus had a choreographic residency working with the new MA students at Bath Spa University. She spend a great week working with the talented international group on improvisation, body work and ‘being’.

Chloe received an Arts Council of Wales grant to carry out a research and development project towards ‘Pine‘. This saw her work with Saz Moir on ideas towards an original set design in the round and collaborations with dramaturge/performer Gerald Tyler and performer Alex Marshall-Parsons to explore issues of human isolation and connection amongst our hectic modern lives. This was a valuable and rich project and Chloe is seeking to developed it into a full length production in Autumn 2016.

Chloe has been working as Co-choreographer and Performance Team Leader for Ar Waith, Ar Daith, a project celebrating the 10th anniversary of the Wales Millennium Centre. The project culminated in a large scale event celebrating the building and the artists in Wales on the 12th September 2015. More information can be found here.

Chloe spent three weeks in residency at Lake Studios Berlin in July 2015 developing her creative practice and exploring bungee-assisted dance. Huge thanks to the Arts Council of Wales for the training grant which made this possible.

The company were excited to be awarded a grant from the Kevin Spacey Foundation. Exploring the importance of failure, the project saw Chloe attending stunt school in order to learn how to fall down stairs. The company then collaborated with Newson Media in the creation of a short dance film, Taking Flight. This had its first screening as part of the Wales Dance Platform on Saturday 27th June at Chapter Arts Centre Cinema, Cardiff and is now available to be screened at other platforms and festivals. Please contact Chloe for further information.

Chloe Loftus has recently been involved in the creation of three exciting short dance films. A music video for Cerys Matthews, another music video for Turbowolf (as the green masked voodoo-worshipper) and a promotional video for Cardiff International tourism for Media Wales.

The company were also awarded the Ignite 2014/15 commission to choreograph a new work on the talented Monmouthshire Youth Dance Company. The piece was performed with great responses in Abergavenny and The Dance House, Cardiff in Spring 2015.

This website was developed in 2014 so for company details preceding this date please check out our Projects page.